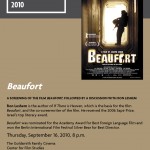 A screening of the movie Beaufort followed by a talk by Ron Leshem. The film is based on Leshem’s novel and was nominated for  an Academy Award for Best Foreign Language Film, and won the Berlin International Film Festival Silver Bear for Best Director.
Location: Goldsmith Family Center, 301 Washington Terrace, Middletown, CT at 8 p.m. 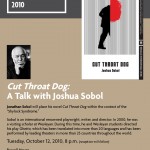 Tuesday, October 12, 2010 , Joshua Sobol’s talk about his novel Cut Throat Dog
Joshua Sobol will place his novel within the context of the “Shylock Syndrome.” 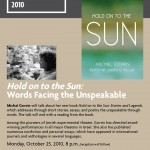 Monday, October 25, 2010 , Michal Govrin’s  talk about her new book Hold on to the Sun: Stories and Legends

The talk will end with a reading from Michal Govrin’s new book.

Thursday, November 4, 2010, screening of the movie Steal  A Pencil For Me

” I am a very special Holocaust survivor. I was in the camps with my wife and my girlfriend—and believe me, it wasn’t easy”, thus confesses Jack about his love affair to Ina during the war. A documentary about the power of love and human power to rise above suffering.

Sponsored by the Jewish and Israel Studies, the Film Studies Department and the Academy of Motion Pictures Arts and Sciences.
Free Admission.